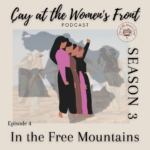 Çay at the Womensfront
In The Free Mountains

What is going on in the free mountains of Kurdistan? Kurdistan and it’s people are going through the most difficult time in their history right now. In eastern Kurdistan the people, led by brave young women, are relentlessly fighting in the streets against the Iranian Regime. West-Kurdistan, Rojava is continuously under military attack by the Turkish state. But what is actually happening in the mountains of north and south Kurdistan is not widely known. Horrible photos are circling in the internet. The mountains in which the Kurdish Guerilla is living and fighting for freedom, are under the heaviest attacks. The Turkish army is bombing the freedom fighters with chemical and other internationally banned weapons. But why is no one intervening? Who are the Guerilla, these young women and men, that are resisting so fearlessly? And what do they have to do with the Rojava-Revolution? These questions and all facts about the current chemical attacks, are the topics of this new episode “In The Free Mountains”.