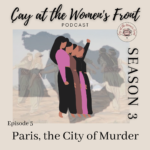 Çay at the Womensfront
Paris - The City of Murder

In the heart of Europe, in the so called city of love, a feminicide against Kurdish revolutionaries happened for the second time. On Dec. 23rd 2022, three Kurdish friends have been shot in Paris and lost their lives. One of them was Evin, who has been a vanguard in the Kurdish women’s movement for decades. This massacre reminds everyone immediatly of the killing that happened exactly 10 years ago, also in Paris. At that time three women of the Kurdish women’s movement had been shot, who played a leading role in the women’s freedom struggle.

Who were these women and why were they targeted? What is the connection between these two murders? And who is responsible for the killings? These questions and more we discuss in this last episode of the third season on our podcast. Arjîn, a kurdish young women who is active in the women’s movement in Europe and Anja, who has known Evin personally, are answering all our questions!