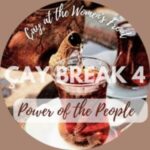 Çay at the Womensfront
Power of the People

What makes the revolution in Rojava so successful and growing for over 10 years now, is the power of the society, the power of the people. But what does that actually mean? What is the strategy behind and how does this look like in the reality here in Rojava? A  woman friend joined our 4th cay break to talk about the concept of revolutionary people’s war and what it means for a revolutionary movement that aims to liberate the society. As becoming very clear in the light of the increasing attacks of the Turkish state right now, the revolution is based on defending and fighting for itself which is going further then professionally organized military structures like YPG and YPJ. Each person has a responsibility in defending the society and the land of their home, as real freedom can only be created by the people standing up for themselves. This means taking the responsibility in the shape of all kinds of different roles, from giving space in your house to the fighters to the armed struggle itself. In that way society creates a power as a whole.

We all need to stop relying on the states that oppress us! We need to relearn how to defend and fight for ourselves and communities!